Python instructors on OAK Academy specialize in everything from software development to data analysis, and are known for their effective, friendly instruction for students of all levels.
Whether you work in machine learning or finance, or are pursuing a career in web development or data science, Python is one of the most important skills you can learn.

Python's simple syntax is especially suited for desktop, web, and business applications. Python's design philosophy emphasizes readability and usability. Python was developed upon the premise that there should be only one way (and preferably one obvious way) to do things, a philosophy that has resulted in a strict level of code standardization. The core programming language is quite small and the standard library is also large. In fact, Python's large library is one of its greatest benefits, providing a variety of different tools for programmers suited for many different tasks.

Do you want to learn one of the employer’s most request skills? If you think so, you are at the right place. Python, machine learning, django, python programming, ethical hacking, machine learning python, python bootcamp, data science, data analysis

In the course, you will have down-to-earth way explanations with hands-on projects. With my course, you will learn Python Programming step-by-step. I made Python 3 programming simple and easy with exercises, challenges, and lots of real-life examples.

This Python course is for everyone!

My "Python: Learn Python with Real Python Hands-On Examples"  is for everyone! If you don’t have any previous experience, not a problem!  This course is expertly designed to teach everyone from complete beginners, right through to professionals ( as a refresher).

Python is a general-purpose, high-level and multi-purpose programming language. The best thing about the Python is, it supports a lot of today’s technology including vast libraries for twitter, data mining, scientific calculations, designing, back-end server for websites, engineering simulations, artificial learning, augmented reality and what not! Also, it supports all kinds of App development.

No prior knowledge is needed!

Python doesn't need any prior knowledge to learn it and the Ptyhon code is easy to understand for the beginners.

What you will learn?

In this course, we will start from the very beginning and go all the way to programming with hands-on examples . We will first learn how to set up a lab and install needed software on your machine.  Then during the course, you will learn the fundamentals of Python development like

With my up-to-date course, you will have a chance to keep yourself up-to-date and equip yourself with a range of  Python programming skills. I am also happy to tell you that I will be constantly available to support your learning and answer questions.

Do not forget ! Python for beginners has the second largest number of job postings relative to all other languages. So it will earn you a lot of money and will bring a great change in your resume.

Here is the list of  what you’ll learn by the end of course,

Why would you want to take this course?

Our answer is simple: The quality of teaching.

When you enroll, you will feel the OAK Academy`s seasoned developers' expertise.

What is python?
Machine learning python is a general-purpose, object-oriented, high-level programming language. Whether you work in artificial intelligence or finance or are pursuing a career in web development or data science, Python bootcamp is one of the most important skills you can learn. Python's simple syntax is especially suited for desktop, web, and business applications. Python's design philosophy emphasizes readability and usability. Python was developed on the premise that there should be only one way (and preferably, one obvious way) to do things, a philosophy that resulted in a strict level of code standardization. The core programming language is quite small and the standard library is also large. In fact, Python's large library is one of its greatest benefits, providing different tools for programmers suited for a variety of tasks.
Python vs. R: What is the Difference?
Python and R are two of today's most popular programming tools. When deciding between Python and R in data science , you need to think about your specific needs. On one hand, Python is relatively easy for beginners to learn, is applicable across many disciplines, has a strict syntax that will help you become a better coder, and is fast to process large datasets. On the other hand, R has over 10,000 packages for data manipulation, is capable of easily making publication-quality graphics, boasts superior capability for statistical modeling, and is more widely used in academia, healthcare, and finance.
What does it mean that Python is object-oriented?
Python is a multi-paradigm language, which means that it supports many data analysis programming approaches. Along with procedural and functional programming styles, Python also supports the object-oriented style of programming. In object-oriented programming, a developer completes a programming project by creating Python objects in code that represent objects in the actual world. These objects can contain both the data and functionality of the real-world object. To generate an object in Python you need a class. You can think of a class as a template. You create the template once, and then use the template to create as many objects as you need. Python classes have attributes to represent data and methods that add functionality. A class representing a car may have attributes like color, speed, and seats and methods like driving, steering, and stopping.
What are the limitations of Python?
Python is a widely used, general-purpose programming language, but it has some limitations. Because Python in machine learning is an interpreted, dynamically typed language, it is slow compared to a compiled, statically typed language like C. Therefore, Python is useful when speed is not that important. Python's dynamic type system also makes it use more memory than some other programming languages, so it is not suited to memory-intensive applications. The Python virtual engine that runs Python code runs single-threaded, making concurrency another limitation of the programming language. Though Python is popular for some types of game development, its higher memory and CPU usage limits its usage for high-quality 3D game development. That being said, computer hardware is getting better and better, and the speed and memory limitations of Python are getting less and less relevant.
How is Python used?
Python is a general programming language used widely across many industries and platforms. One common use of Python is scripting, which means automating tasks in the background. Many of the scripts that ship with Linux operating systems are Python scripts. Python is also a popular language for machine learning, data analytics, data visualization, and data science because its simple syntax makes it easy to quickly build real applications. You can use Python to create desktop applications. Many developers use it to write Linux desktop applications, and it is also an excellent choice for web and game development. Python web frameworks like Flask and Django are a popular choice for developing web applications. Recently, Python is also being used as a language for mobile development via the Kivy third-party library.
What jobs use Python?
Python is a popular language that is used across many industries and in many programming disciplines. DevOps engineers use Python to script website and server deployments. Web developers use Python to build web applications, usually with one of Python's popular web frameworks like Flask or Django. Data scientists and data analysts use Python to build machine learning models, generate data visualizations, and analyze big data. Financial advisors and quants (quantitative analysts) use Python to predict the market and manage money. Data journalists use Python to sort through information and create stories. Machine learning engineers use Python to develop neural networks and artificial intelligent systems.
How do I learn Python on my own?
Python has a simple syntax that makes it an excellent programming language for a beginner to learn. To learn Python on your own, you first must become familiar with the syntax. But you only need to know a little bit about Python syntax to get started writing real code; you will pick up the rest as you go. Depending on the purpose of using it, you can then find a good Python tutorial, book, or course that will teach you the programming language by building a complete application that fits your goals. If you want to develop games, then learn Python game development. If you're going to build web applications, you can find many courses that can teach you that, too. Udemy’s online courses are a great place to start if you want to learn Python on your own.

All our videos are created/produced as high-quality video and audio to provide you the best learning experience.

See you in the Python: Learn Python with Real Python Hands-On Examples course! 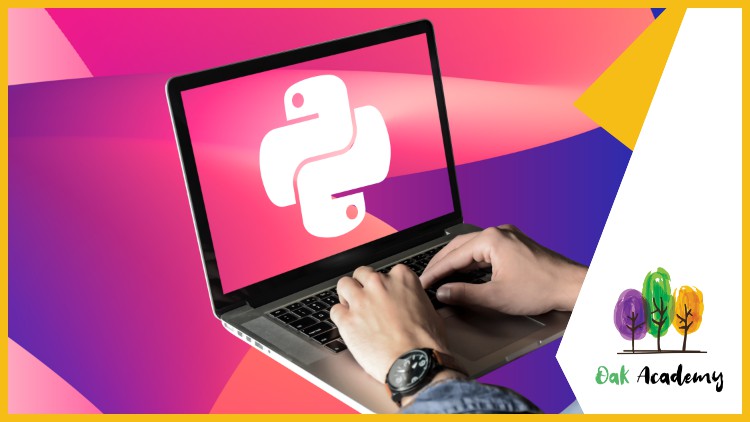